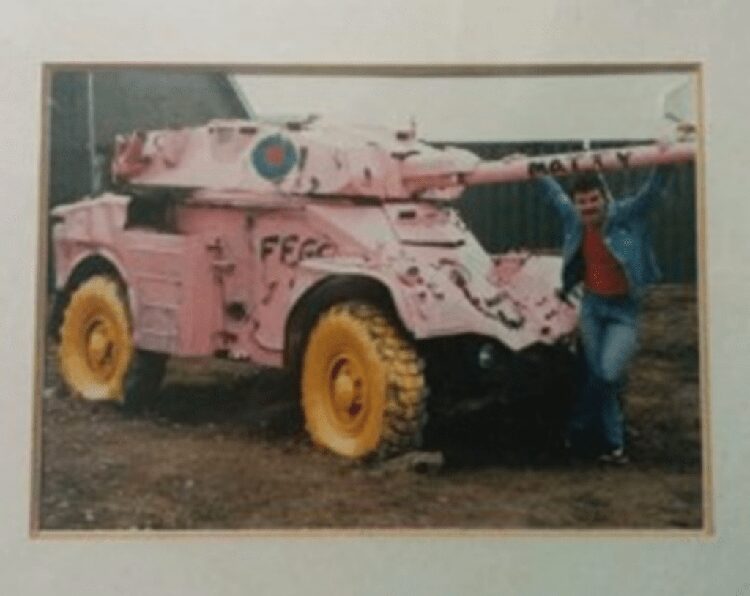 A Pink Tank & A Conversational Manoeuvre!

I was asked by UK news website B Daily what are the five rules that I live by?

At the top of the post is a pink tank and the following story will help to demonstrate my rules… or lack thereof!

Many moons ago, at military post called Mount Pleasant in the Falkland Islands, two young airmen had a bit too much to drink; I might point out that it was Christmas time and they were far away from home. Somehow, these two chaps got it into their heads that the tank which was parked up in front of them would look better in pink, “to brighten the place up a bit, for Christmas!” they chortled. Where did the paint come from? Who knows? But about thirty minutes later there she stood, a work of art, by beer goggle standards! The airmen were so happy with their work that they even signed it… Oh dear! The next morning the airmen were awoken rather abruptly from their slumbers and frog marched to the squadron leader’s office. At the end of the riot act, which was read out very loudly by a purple-faced officer who had steam coming out of his ears, the airmen were asked if they had anything to say…

“Well Sir, we both have very good records for being exemplary airmen, we share the base with the navy and the army. Does it seem conceivable that we would not only be dumb enough to paint the tank outside of your office, but then to sign our names on in it…?” The squadron leader agreed that it was a particularly stupid thing to do and therefore it must have been one of the other services attempting to bring the “exemplary airmen” into disrepute. We saluted the officer with a hearty smile and exited as quickly as possible. That day and for the whole of Christmas the unit were laughing and morale was up! The Squadron leader even took the tank in for a professional makeover, which wasn’t quite the same. I share this tale as a reminder that yes, I could have just obeyed the rules and plodded on miserably. However, there were no rules about painting the tank pink, so I guess now and again you have to make up your own rules if you want to find the fun in your life. For the rest of my rules click here. This website uses cookies to improve your experience while you navigate through the website. Out of these cookies, the cookies that are categorized as necessary are stored on your browser as they are essential for the working of basic functionalities of the website. We also use third-party cookies that help us analyze and understand how you use this website. These cookies will be stored in your browser only with your consent. You also have the option to opt-out of these cookies. But opting out of some of these cookies may have an effect on your browsing experience.
NecessaryAlways Enabled
Necessary cookies are absolutely essential for the website to function properly. This category only includes cookies that ensures basic functionalities and security features of the website. These cookies do not store any personal information.
Non-necessary
Any cookies that may not be particularly necessary for the website to function and is used specifically to collect user personal data via analytics, ads, other embedded contents are termed as non-necessary cookies. It is mandatory to procure user consent prior to running these cookies on your website.
SAVE & ACCEPT